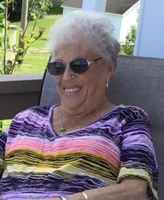 Joan Lewis of Ellenville, NY, passed away at home on the morning of August 17, 2020. The daughter of the late Isaac Williams and Ferne Payne, Joan was born on August 20, 1941.

Joan worked as a cook at Scharade Cutlery for 18 years before she decided to make a change. She went on to work as head cook at the Kerhonkson Elementary School - retiring in June of 2008. Joan was a proud member of the Ellenville Elks Lodge #1971 in Napanoch, NY.

Survivors include her daughter; Vicki Forgette and her wife Nicole, sons: Ron Conklin and his wife Tammy, Scott Conklin, step-son; Steve Lewis, sisters; Carol Knapp and her husband Fred, and Betty Distel and her husband Butch, as well as one brother; Don Williams and his wife Kathy. Joan leaves behind 9 grandchildren, 14 great grandchildren, several nieces and nephews and her little companion, Furby.

Per Joan’s wishes there will be no services. Cremation will be held privately.

“She will remain forever in our hearts.”

Funeral arrangements are honorably entrusted to Zygmunt-Murtie Funeral and Cremation Service- Proudly serving Warwick and the surrounding communities. For directions or to leave a condolence please call 845-977-6127 or visit www.zmmemorials.com.